Mike and Jaime Olson credit their involvement in Escuela Integrada with bringing them back together as a couple and as a family. Mike first visited the school in 2014 with a Lifeonaire team from Wisconsin. The following year, the whole family came to see the school, and their relationship with the school continues to grow. 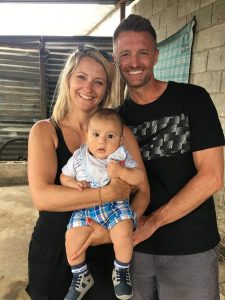 Jaime and Mike Olson visit their sponsor family every time they are in Guatemala. In June 2017, they met Carlos Almeyro, the first grandchild in the family.

“Jaime and I were not ‘equally yoked’ in our marriage the first time I came to Guatemala,” Mike said, referencing 2 Corinthians 6:14. “I was going through some major changes in my career and in my faith. Escuela Integrada brought us back together in our walk with the Lord.”

For Jaime, the first time they came to Escuela Integrada as a family reignited her faith.

“I use the example of a pilot light,” she said. “My faith was always burning, but hadn’t grown the way it has since I became involved in the school. Our involvement as a family brought us back together and made us better parents as well.”

The Olson’s three children, Chase, 16, Landon, 13, and Reese, 11, are also now deeply connected with the mission of Escuela Integrada. They came with Jaime and Mike in 2015, and again in 2017 when Jaime and Mike led the mission team from Emanuel United Methodist Church in Baraboo, Wisconsin. 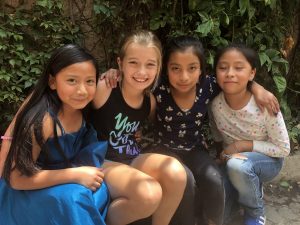 This year, Mike and Jaime led the Emanuel team again, and Landon and Reese came with them. Jaime, Landon and Reese are staying in Guatemala for a month to help with the school and to learn Spanish.

“They have an understanding of why we’re here, and they have never been uncomfortable,” Jaime said. “They tell friends about their experiences, about the school, the kids and the culture. They have become advocates for the mission, and they want to share it.” 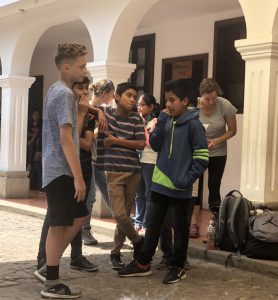 Landon Olson, 13, spends time with boys from the school during recess.

The children’s mother, Aura Castellanos, works at Escuela Integrada as one of the cooks. As a recipient of the GRACES Gratitude program, Aura is continuing her education in baking classes. The program is a 1-year initiative to support teachers and staff from the school in professional development.

“We are close to the whole family, not just the kids we sponsor,” Jaime said. “They pray for us just as we pray for them, and we talk, sometimes daily, on Facebook. We are blessed to have them in our lives.”

When the Olsons are in the U.S., they often share their sponsorship story and invite others to learn more about the impact the school has on families in Guatemala. The mission of Escuela Integrada is to serve the whole child—and by extension, the whole family—with specific programs for education, physical well-being and spiritual growth. 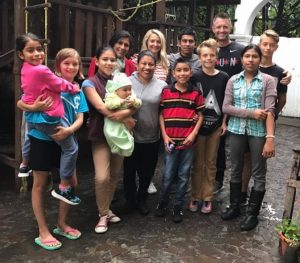 Jaime, Mike, Chase, Landon and Reese Olson visited the home of their sponsor children in the summer of 2017. They stay in touch throughout the year on Facebook.

“When we come here [to Guatemala], we see poverty, but we also see the whole family unit,” Mike said. “Sometimes in the U.S., we have everything materialistically, but we are missing Christ. Here, we see the juxtaposition. We see the love they have for God and for their family. We see the hope and the joy they have in each other, even in difficult circumstances.”

Jaime now serves on the Board of Directors for GRACES, the U.S.-based non-profit that supports Escuela Integrada, and Mike supports her in her work for the school. Together, they appreciate every opportunity they have to serve the school and to bring others—including their children—on the journey.