New microbus a sign of hope for Escuela Integrada

Escuela Integrada has a new microbus thanks to significant contributions from supporters around the country and the generosity of Sergio Pérez.

Many people know Sergio as the driver who picks up Escuela Integrada volunteers and mission teams from the airport in Guatemala City. He is a long-time friend and supporter of the school. When he heard that the school needed a new microbus, he offered to go with Hernan to pick one out. Due to budget constraints, they looked for a used microbus, but could not find one. 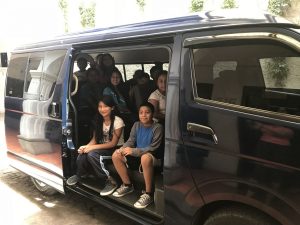 The fourth grade students tested out the new microbus when it arrived at Escuela Integrada on June 13, 2018.

“The problem with used microbuses in Guatemala is that they are all used very heavily,” said Paula Bohland, executive director of GRACES. “They carry many people and many things far distances. It made it very hard to find one that was still in good condition.”

Escuela Integrada depends heavily on microbuses. First and foremost, the school staff use them to transport kids and families who need medical attention. They also use the microbuses to pick up supplies and food for the school. On top of that, the mission teams use them for home visits, where they bring families food, install stoves, build bathrooms and more.

The school was operating with one microbus, which limited transportation and assistance for families. Additionally, Bohland said, it meant that if a microbus was out on a supply run and a child got sick or needed immediate help, they could not respond quickly. 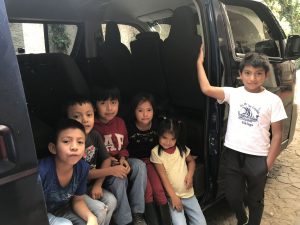 Kids from the school explored the new microbus during recess on Wednesday, June 13, 2018.

“The additional vehicle is not an accessory,” Bohland said. “It’s a necessity. Aside from the school, it’s the most important piece of property we have.”

When Sergio knew the microbus search was not panning out, he offered to sell one of his own vehicles at a major discount to the school. He takes immeasurable care of the vehicles he uses for his transportation company and bought the one he sold to Escuela Integrada in December. The microbus is bigger than the school’s other one. It holds 15 passengers and has seat belts and air conditioning.

Funding for the new microbus was a group effort. Supporters gave whatever they could afford, from $1 to $5,000. A few large donations boosted the microbus campaign to put a new vehicle within reach. Among those who donated, Escuela Integrada wants to recognize the Ortners from The Tapping Solution Foundation and Lifeonaire for their contributions. The students, staff and teachers at the school are very grateful for the support.

The new microbus is a 15-passenger vehicle with air conditioning and seat belts.

“It’s one more piece of hope,” Bohland said. “Four years ago, I would have never imagined this was a possibility. It’s a huge blessing.”