Donna Wetzel is 80 years old, and she is in Guatemala volunteering with Escuela Integrada this week. She always wanted to serve on a mission trip, but was not able to until now. This year, she and her youngest daughter, Jody, signed up with a group from Emanuel United Methodist Church from Baraboo, Wisconsin, where Jody is a member.

“When I told my husband I wanted to go, I don’t think he believed me,” said Donna. “Up until the day I left, he didn’t think I was actually going to go.”

Donna had three concerns before committing to the trip. First, she did not want to leave her husband without companionship for the week. Second, with her husband requiring regular care for Parkinson’s disease, she did not think she could afford the trip. Third, as a committed Catholic, she thought she might have to miss Sunday Mass by going on the trip.

She and her husband, David, always wanted to serve on a mission trip together, but after his diagnosis, the possibility seemed unlikely. David lives in an assisted living facility in Baraboo, and Donna visits him every day. 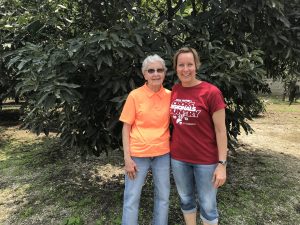 Donna Wetzel and her daughter, Jody Bruni, visited the home of a family from Escuela Integrada. The family cares for an avocado tree farm.

Their eldest daughter, Nora, offered to come up to Baraboo from South Carolina, to spend the week visiting David, while Donna and Jody were gone, which put her first concern to rest. Then, Laurie, their middle daughter, offered to sponsor the cost of the trip for Donna. Nora and Laurie’s efforts helped Donna and Jody fulfill their dream of serving with Escuela Integrada this summer.

“The last time we traveled together was a long, long time ago,” Jody said. “We both had a mission trip on our bucket lists. It’s really nice to be able to do it together.”

Donna’s final concern about missing Mass was also resolved. On Sunday, while the Emanuel team attended a non-denominational service, Donna and one of Escuela Integrada’s volunteers went to Mass at the cathedral in Antigua.

“That was a highlight for me,” she said. “I didn’t think I was going to be able to go while I was on the trip, but God provided the opportunity.”

A week before their trip, Donna and Jody faced a different kind of concern. Guatemala’s Fuego Volcano erupted on June 3, six days before the Emanuel trip.

“The biggest question was safety,” said Jody, who fielded a lot of questions from friends and family about whether or not they should still go on the trip. “It sounded much worse in the U.S.”

Escuela Integrada closed for two days immediately following the eruption, but classes and activities resumed on Wednesday, June 6. Ash accumulated in and around the school, but staff members and teachers removed it before the students returned.

“We feel very safe and very comfortable with the school,” Jody said. “We knew that if it was safe, we really wanted to do it. We wanted to come to Guatemala this summer.” 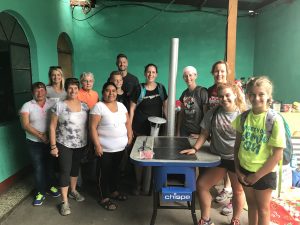 Donna and Jody, along with the other members of the mission team from Emanuel United Methodist Church, installed a stove in a family’s home on Monday, June 11, 2018.

Since Donna and Jody arrived, they installed stoves in families’ homes, played soccer with the kids and went on home visits with the Emanuel team. Later this week, they will host a family night at the school, visit the Mayan ruins at Iximche and take the students from Escuela Integrada to an amusement park in Guatemala City.

“There’s no way I could do this if I wasn’t in good shape,” Donna said as she smiled. “When I was younger, I traveled to Russia and India as a nurse. I never thought I’d be traveling like that again. It’s amazing to watch how God works.”